Warm greetings to you, wherever in the world you may be, from Tipperary.

At the time of writing this blog post, the autumnal colours are in full swing and enrichened by the local countryside, we find ourselves immersed in country walks among browns, yellows, reds and oranges. Rich russet overtones combine with a million hues of earthy greens as we witness nature teaching us about letting go, loss and death.

This month sees the back of Halloween and the run in towards Christmas, or if you prefer, the full moon to mark the end of Samhain as we progress towards Yuletide. It is a familiar time of year for checking up on stocks for winter, including paying bills for oil, gas, wood and coal, and covering the cost of Christmas gifts and other extraordinary expenditure.

It is, as it has been in Ireland, a difficult time for many.

Engineered food shortages, engineered price hikes, engineered wars and psy-ops and goodness knows what being sprayed upon us from the skies, blocking out our sunshine, and negatively affecting our water, air and crops.

The cat is out the bag, one might say. 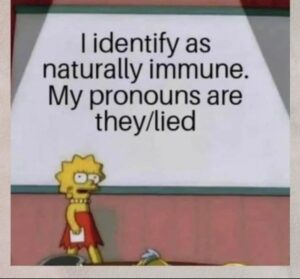 Even for the normies who somehow managed to deny the obvious and convince themselves the media and the government weren’t lying, and that they could “trust the science.”

Not actual science, as in testing and verifying data, then establishing cause and effect via analysis, synthesis and syllogistic reasoning.

No, this was a new science.

As if anyone was in any doubt, the truth continues to emerge, confirming the long-planned and sinister events over the last couple of years, where we witnessed societal lockdowns, restrictions on freedom of speech and freedom of travel, infringing on the civil liberties of people, many of whom were threatened with losing their jobs if they did not accept the so-called vaccinations, which, it has now been confirmed, were never even tested for transmission.

The depth and extent of this psychological operation (or ‘psy-op’) was not a surprise to some.

Some people had done their homework, done their research, and saw all this coming.

“No mask, no jab, no test,” quickly became our mantra. 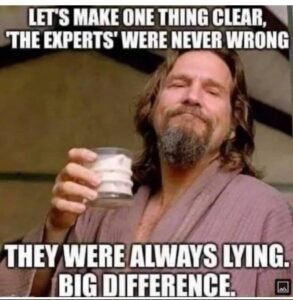 We do not consent.

We are not playing ball with paedophiles and satanists.

Having read a David Icke book over a decade ago, and having cultivated a regular meditation practice, I have had plenty of opportunity to reflect on the totalitarian tip-toe which has gradually turned into a jackboot on the neck of humanity.

It would appear that we are living in very interesting times indeed.

For those of us who were dubbed ‘crazy’ or ‘conspiracy theorists’ there is a whiff in the air of “we told you so,” now that legal actions are taking place to sue pharma companies for releasing a lethal combination of deadly ingredients, in these so-called ‘vaccinations’, which have unfortunately yielded a plethora of long-lasting and damaging side-effects which were allegedly known prior to them being released.

Experts in virology, immunology, chemistry and molecular biology, such as Vernon Coleman, and the inventor of the MRNA gene therapy, Dr Robert Malone, were censored, deplatformed and shut down from any form of public debate. The inventor of the PCR tests, Kary Mullis, went public to state before he strangely died, that the test he invented could not detect viruses. And even Mike Yeadon, ex-CEO of Pfizer was deplatformed and dismissed as a conspiracy theorist.

If all of this doesn’t wake people up to the emerging truth, a truth which was evident to some from day one, what could?

What has been truly shocking, is the extent of the vast numbers of people deeply programmed, brainwashed and conditioned into believing the mainstream media lies, unable to perform simple tasks such as critical thinking, or just even disconnecting from all the distraction, sitting in silence and stillness, and just thinking for themselves.

Is that such a revolutionary practice?

Nonetheless, people are waking up from their deep sleep, and in record numbers.

This video might help if you are in any way still ‘on the fence’: https://www.bitchute.com/video/jclS4HVslP6g/

The Truth can never be defeated, only set free.

The Truth has an energetic vibration, a signature with which we may identify.

And this is one of the reasons why the Truth Clinic was created.

Not just as a tool for sharing your truth, but as a resource for people waking up to the fact that we have been lied to, from cradle to grave.

The question is by how much.

Which is pretty much everything!

Flat earth, mud flood, Tartaria, Antarctica, fake moon landings, JFK, Titanic, Vietnam (and all the other wars) we have been bombarded with false flags and a fake history and fake ‘education’ not to mention fake geography to the point where we cannot know just how deeply we have been deceived, misinformed, manipulated and enmeshed in the web of lies.

And as we go down these different rabbit holes, things do indeed get curiouser and curiouser.

Aside from honesty, truth and telling it like it is, at the heart of the work we do at Menscape and the Write Coach, is authenticity.

Authenticity in who we are and what we do, is at the heart of the healing journey. 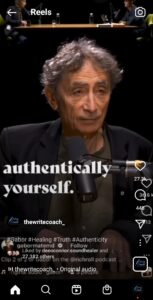 And as Dr Gabor Mate confirms, authenticity is actually at odds with society and culture, in the sense that we are rewarded for conformity and punished for non-conformity.

In a recent Instagram post which I shared, and curiously went viral, a 42-second reel with over 600K views, 30K likes and 500 comments and shares, from an interview he did on the Rich Roll podcast, Gabor explains that we have to take on the role of authenticity for ourselves, in order to heal from the influences of a society which is profoundly sick, creates victims of addiction and depression and is clearly at odds with positive mental health.

You may view that reel and other extremely beneficial content here https://www.instagram.com/thewritecoach_/

This year has seen the growth of the Write Coach as a start up business doing healing work and helping people who have a story to tell.

It has been hugely rewarding and fulfilling work and I am grateful to my clients for entrusting me with their deepest, darkest secrets, family traumas and childhood experiences.

Not only their faith and courage, but also the kind things they have said about me. including this testimonial on the web page with the free guide, which you may download if you are looking for some tips on getting started if you ever intended to write your own book: https://thetruthclinic.com/free-guide/

This year has also seen the development of monthly podcasts, and it has been my pleasure to interview some very excellent guests, in a format which is going to get a little shaken up with a section entitled the ‘Glitch in the Matrix’, where guests will be asked about strange experiences which would appear to corroborate the theory that we are living in a hologram, or a simulation.

My glitch in the matrix experience is documented in the first book I published, where I had a dream inside of a dream, which freaked me out and made me question what we accept as ‘reality’. More about that here https://thetruthclinic.com/the-fox-and-the-scorpion-meet-cold-turkey/

Those very excellent podcasts can be watched here, we hope that you will enjoy them!

What would be your ‘glitch in the matrix’ story?

Feel free to leave a comment below or get in touch with us if you have any questions about embarking on the cathartic and rewarding journey of telling your own story.

We look forward to our first ever female guest on the MenScape podcast next month, and we look forward to helping more people from an international client base with their healing journeys. Watch this space for more blogs!

Wishing you all the very best for the season’s holidays during winter and a prosperous and abundant 2023!

Posted in Blog
Scroll To Top